William John Henry ("Harry") Evans was born in Dartmouth and baptised at St Petrox on 15th September 1897. He was the son of William Charles Moore Evans and his wife, Elizabeth Ann Damerell.

William Charles Moore Evans had come to Dartmouth as a child with his father and mother, John and Ann Evans, from Sherford, near Kingsbridge. The family was recorded in the 1881 Census living in Warfleet, Dartmouth - John was described as a labourer. By the time of the 1891 Census, however, John Evans was working as a Brewer at Warfleet Brewery, and his son William Charles was working alongside him as a maltster. Warfleet Brewery was at that time owned by Jasper Bartlett, who ran a grocery business on the New Quay, as well as several licensed properties, and was also the managing director of the Channel Coaling Company.

William Charles married Elizabeth Ann Damerell on Christmas Eve, 1895, at St Clements Townstal. She was the daughter of John Damerell, a labourer, and his wife Mary Ann Luckraft, and was born in Dittisham. Later, her family moved from Dittisham to Ringmore, near Modbury. By the time of the 1891 Census, she was working in domestic service for Dr John Harris, a GP in Modbury, and his aunt Matilda. At the time of her marriage to William Charles, she lived in Browns Hill, Dartmouth.

By the time of the 1911 Census, John Evans was described as "Brewer" and was managing the brewery. He and his wife continued to live in Brewery Cottages. Also still at Brewery Cottages were William Charles, now "Cellarman", with Elizabeth Ann and their three children. No occupation was recorded for Alice Maude, aged 15, but William John Henry, aged 13, was working nearby as a "houseboy", at Woodlands, for Horace Bartlett, Jasper Bartlett's brother, and his family. John Damerell, aged 11, was still at school.

William John Henry was one of those in Dartmouth who stepped forward at a big recruiting meeting held on 3rd September 1914. He joined the 8th Battalion Devonshire Regiment, along with many others in Devon, including several from Dartmouth. We have not been able to trace a birth registration record for him, and his baptism record does not give his date of birth. However, assuming he was baptised at only a few weeks or months old, he would have been barely seventeen when he enlisted. It seems he gave his name as "Harry" -plain and simple - surviving military records are in this name.

Before the war, it had been the rule that those under nineteen should not be able to join the Regular forces, with a bar on service overseas until twenty years of age. When war broke out, enlistment into the army was altered to a minimum of 18 years, with a bar on going abroad until nineteen. Harry's papers have not survived, but as with many others, either he overstated his age at this time, or the recruiting sergeant turned a blind eye.

The 8th Battalion was the first of the Kitchener or "Service" Battalions to be formed by the Devonshire Regiment and was filled quickly. By September, the Battalion was in training at Aldershot. The 1915 Star Medal Roll confirms that Harry arrived in France with the 8th Battalion on 25th July 1915.

Records indicate that Harry's body, like many who died in the battle, was never found. The Army Registers of Soldiers Effects recorded Harry's date of death as "25th September 1915, on or since, death presumed". The 1915 Star Medal Roll (dated 13th November 1919) similarly recorded his death as "death regarded 25th September 1915". He was 18.

William John Henry, as "Harry", is commemorated in France on the Loos Memorial, close to where he died, together with seven other men commemorated in Dartmouth who joined the 8th Battalion Devonshire Regiment when he did, and died, or who are considered to have died, on 25th September 1915: 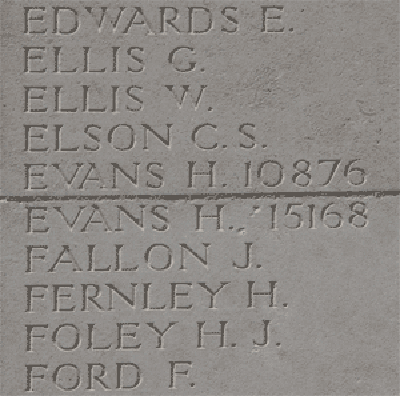 As one of the 579,206 casualties in the region of Nord-Pas-de-Calais, Harry is also commemorated on the new memorial at Notre Dame de Lorette, "The Ring of Memory". 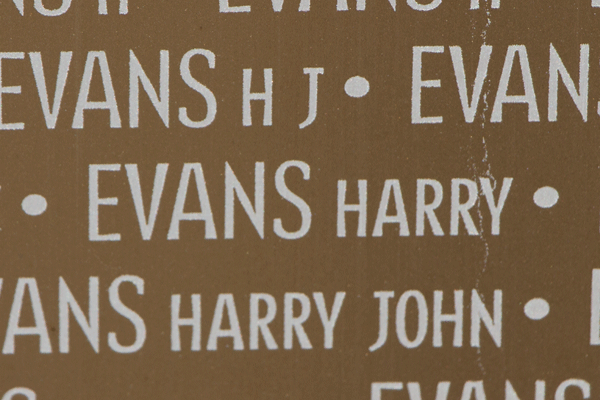 He is also commemorated as "Harry Evans" on the Town War Memorial.

He is commemorated on the St Petrox War Memorial as William John Henry Evans. 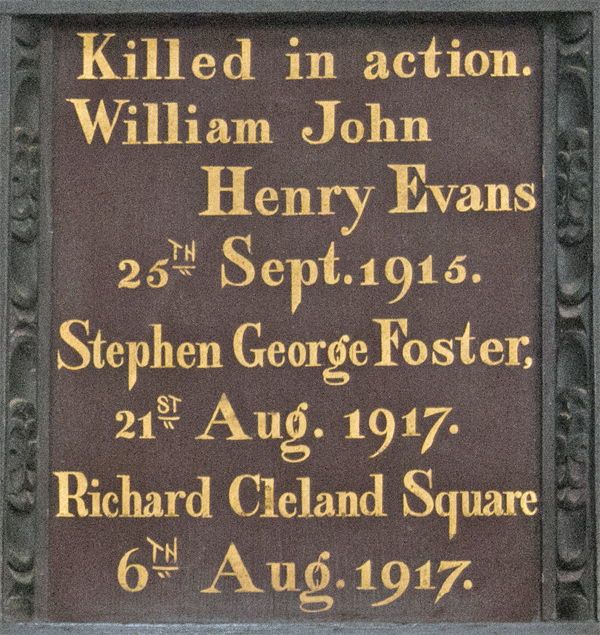 William John Henry was predeceased by his father, William Charles Moore Evans, who died at the Cottage Hospital, Dartmouth, and was buried in St Clement's Townstal on 21st December 1914, aged 42.

His grandfather, John Evans, who had been head brewer at Warfleet Brewery for 50 years, died in 1928, aged 85, and was also buried in St Clement's Townstal, on 22nd October.