Frederick John Widdicombe was born on 2nd December 1891 and baptised at St Saviours on 21st April 1891. He was the eighth of ten children of George Henry Widdicombe and his wife Margaret Pym.

George and Margaret married in St Saviours on 21st September 1871. He was a shipwright, the sixth child of Thomas Widdicombe and his wife Mary Ann. In 1851, Thomas farmed twelve acres at Swannaton, between Dartmouth and Stoke Fleming, and the family lived at Warfleet. Margaret was the eldest daughter of Daniel Pym, a river Pilot and fisherman, and his wife Sarah Ann, and came from Topsham.

All George and Margaret's children were baptised at St Saviours:

Frederick was first recorded in the 1901 Census. By that time the family had moved to Coombe, to the north of the town. Although three of the girls had left home, Frederick's three elder brothers were still at home. All worked as shipwrights or (in George's case) as a labourer in a shipyard (the census does not specify which yard).

George died in January 1903, soon after Frederick's twelfth birthday. However, Margaret kept her family together; by the time of the 1911 Census, they lived in Coombe Yard, and all five of her sons were still at home. Frederick was the only one who did not work in a shipyard; he was a gentlemen's servant, at the Royal Naval College at the top of the hill above Coombe.

Frederick's service papers have not survived, but his name is listed in the Dartmouth Chronicle in their very first list of "Dartmouth patriots who have responded to the National Call to Arms during the present great European War", published on 11th September 1914. Along with a large group of men who came forward at a recruiting meeting held in Dartmouth on 3rd September 1914, Frederick joined the 8th Battalion of the Devonshire Regiment, the first of the "Kitchener" or Service Battalions to be formed by the Regiment. Also in the group was John Samuel Webber, also killed in action during the Battle of Broodseinde (though by that time, Frederick was no longer in the 8th Devons).

Because of the large numbers of Dartmouth men joining them, both early in the war and later, the 8th Devons' experiences may be followed through stories we have published so far:

On 5th September 1916, while still in the Devonshire Regiment, Frederick's name appeared in a casualty list published in The Times, as "wounded - shellshock". (This cannot have been the incident of the same date in which William Marks Carpenter was killed, but must have occurred earlier, presumably during the fighting in July - the 8th Devons had a long rest period during August 1916). How seriously he was affected, where he was treated, and how long he was out of the fighting, is not known. It is likely, however, that he was transferred to the 1st Battalion of the Somerset Light Infantry on recovery.

The 1st Somerset Light Infantry, as a regular battalion, went to France in August 1914. They had fought in the Battle of the Marne and of the Aisne in September 1914, in the first battle of Ypres in 1914, the second battle of Ypres in 1916, and had taken part in the first day of the Battle of the Somme, when they sustained very heavy casualties. They were then sent back to Ypres, where on 10th August 1916 they suffered yet further casualties from a phosgene attack at very short range.

In October 1916, they returned to the Somme, where they spent the winter; in 1917, they fought in the Battle of Arras, remaining in the Arras sector for several months, before moving back to Flanders in October 1917.

On 30th August 1917, whilst on a period of leave, Frederick married Elizabeth Jane Saunders, at St Saviours. They both gave their address at the time of their marriage as 43 Clarence Street.

Elizabeth was the youngest daughter of James Saunders and Ann Maria Beal, and was born in Marldon, near Paignton. She had a Dartmouth connection through her mother - James, a labourer, from Denbury, and Ann Maria, from Dartmouth, had married at St Saviours in 1878. At the time of the 1911 Census, Elizabeth, aged 15, was already at work. She was the maid to Miss Heroine Davy and her companion, at "Capodimonte", Paignton, Devon.

Frederick and Elizabeth's married life can have been only a few weeks at most.

The Third Battle of Ypres

The Third Battle of Ypres had begun on 31st July 1917 - for the background to this offensive, see the story of William John Farrow Bates, of the 2nd Devons, killed on the first day while attacking east of the city.

On 25th August, General Haig transferred responsibility for planning the next stage of the offensive to General Plumer, commanding Second Army, from General Gough, commanding Fifth Army. General Plumer first wanted three weeks preparation, before a series of "bite and hold" attacks, in four steps, each followed by a six-day pause, to allow for consolidation, defence against any counter-attack, and preparation of the next step.

The first step, now called the Battle of Menin Road, had begun on 20th September, in good weather, and - broadly - achieved its objectives. After the requisite six days, the next step, now called the Battle of Polygon Wood, was launched on 26th September. Although an attack by the Germans intended to disrupt preparations had some success, the front was pushed forward another 1000-1250 yards. In the third step on 4th October, the Second Army attacked the Broodseinde Ridge, the Zonnebeke Spur and Gravenstafel Spur, whilst the Fifth Army (including 1st Somerset Light Infatnry) alongside them to the north moved on Poelcappelle. 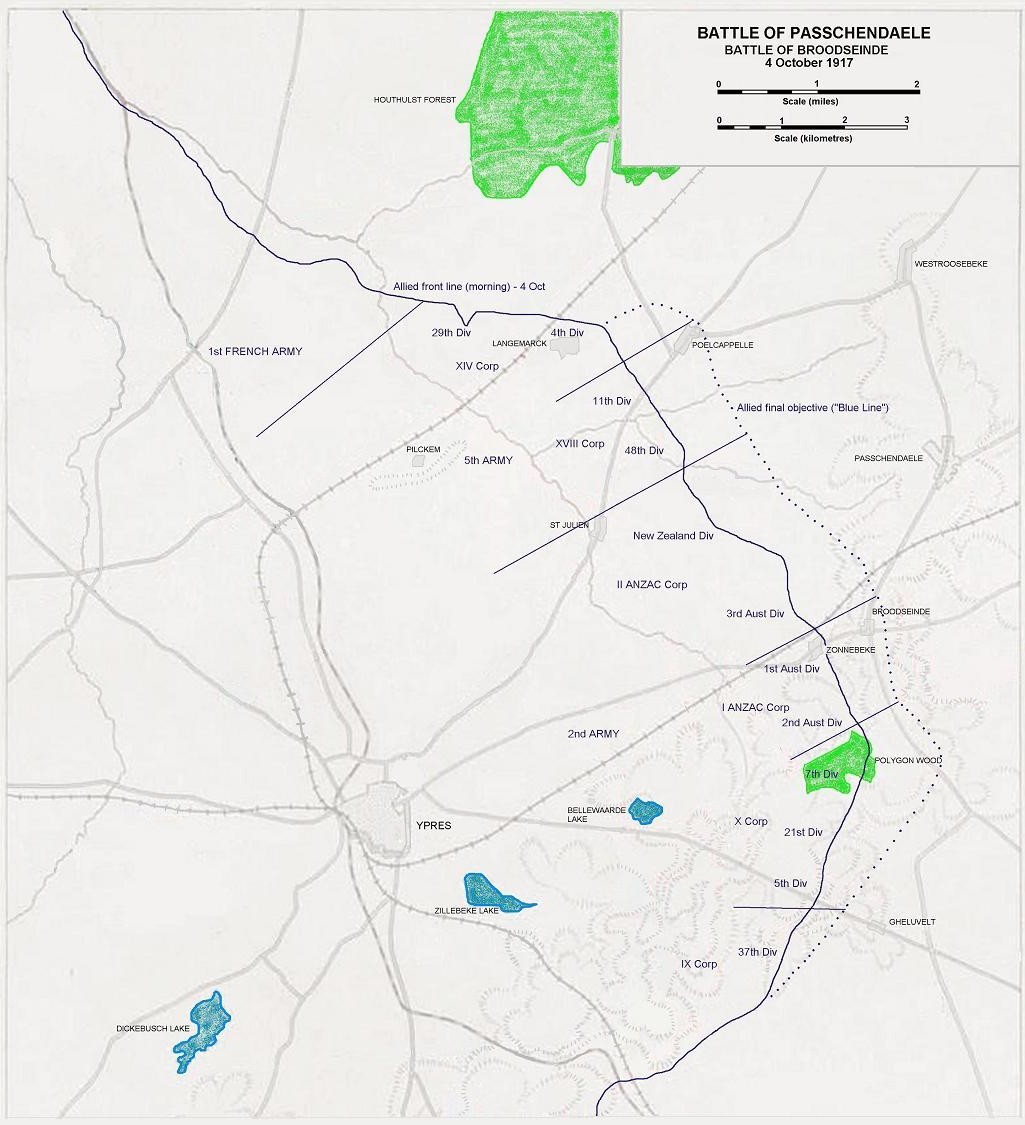 The Somerset Light Infantry were part of 4th Division, which attacked towards Poelcapelle, east of Langemarck. From the correspondence published in the Dartmouth Chronicle after his death, we know that, by the time of the battle, Frederick was attached to the Machine Gun Corps. Further research is required to establish which Machine Gun company was involved - it evidently sustained heavy casualties (see below).

On 26th October 1917, the Dartmouth Chronicle carried the news of Frederick's death. The news arrived at the same time as that of another double bereavement, that of the Hearn family (Leonard Hearn was killed on 18th October 1917), and also at the same time as the death of John Samuel Webber, already referred to. News of yet further bereavements were to come, in what was called "Dartmouth's Terrible Week", with a treble bereavement in the Burnell family (see the story of Edwin Burnell, referred to above). The newspaper commented:

During the past week the sad side of war has been brought home to us as it never has before. Several Dartmothians have laid down their lives, and in two instances families have sustained double bereavements, losing two sons each within the last fifteen months. These are terrible days, and the sympathy of everyone in the town will go out to the bereaved ones, although language will fail in the adequate expression of it.

The circumstances relative to the death in action on October 4th of Gunner Fred Widdicombe of 43 Clarence Street are very poignant, owing to the fact that it is only two months ago since he came home on leave and was married. He was one of the first to join up in Dartmouth, as he offered his services to his King and country at that memorable meeting on the New Ground in September 1914. He was only 25 years of age, and was before the war on the personal service staff at the Royal Naval College. He was a member of an old Dartmouth family, his father, the late Mr George Widdicombe, having resided in Coombe Yard for many years. No particulars as to Gunner Widdicombe's death have yet been received beyond the bare official announcement. Sympathy is being everywhere expressed with his mother, young widow, four brothers and three sisters, all of whom (with the exception of a brother in East Cowes) are residing in Dartmouth.

We cannot tell who next may fall
Beneath thy chastening rod
One must be first, but let us all
Prepare to meet our God.

The more particular information sought by the newspaper was provided on 23rd November 1917:

Neath the Roar of the Guns

"I enclose a packet containing some of the personal belongings of your late husband. I must apologise for not writing sooner, but I myself was slightly wounded, and was unable to write until we came back to rest. It is with sincere regret and sympathy that I write to you concerning the death of your husband, Priv. F Widdicombe, No 30191, Somerset Light Infantry, attached Machine Gun Corps. He was attached to my section, and was a most promising gunner. He was admired and respected throughout the company as a soldier above the ordinary stamp. He was in every sense of the word a soldier and a gentleman. On October 4th the company took part in the battle of Broodseinde, and by the end of the day we had gained all our objectives, which enabled us to have the much-coveted Passchendaele Ridge. Your husband was on the way from company headquarters to join my section when he was killed by a large piece of high-explosive shell. He was buried close to where he fell, and he lies there with the roar of artillery overhead, near the village of Langemarck, in muddy Flanders. Alas! of my section of 40 gallant fellows, only eight came out alive. The officer commanding and officers of the company wish me to convey to you their deepest sympathy in your sad bereavement".

Frederick's grave was either later destroyed or not identified, for he is commemorated on the Tyne Cot Memorial Wall to the Missing, which surrounds the Tyne Cot Cemetery. Tyne Cot was originally a barn, around which were several fortified "pill boxes"; it was captured by the 3rd Australian Division on 4th October 1917, during the Battle of Broodseinde, on the day Frederick died.

After the war, most surviving pill-boxes were dynamited by specialist contractors, and the material used to improve local road surfaces. However, the pill-boxes near Tyne Cot Cemetery were not destroyed, to prevent damage to graves, and were subsequently incorporated into the design of the Memorial. 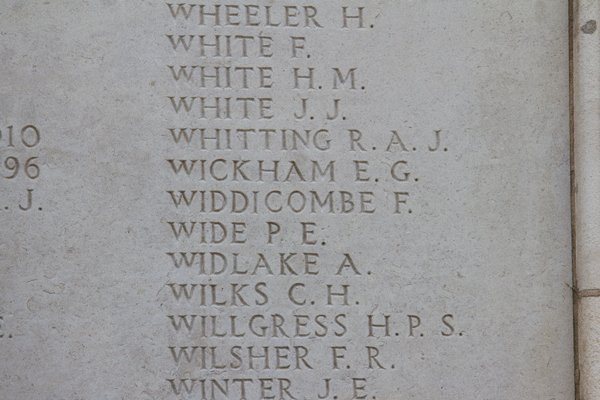 In Dartmouth, Frederick is commemorated on the Town War Memorial and on the St Saviours Memorial Board.

Soldiers Died in the Great War refers to Frederick Widdicombe as "Frank" Widdicombe, which appears to be incorrect.

Frederick John Widdicombe is not the elder brother of Henry A Widdicombe (as suggested by another website).