Thomas Arthur Chase was born on 13th June 1879 in Dartmouth. He was the youngest of six children of John Chase and his wife, Charlotte Memory.

John Chase was also born and brought up in Dartmouth, the eldest son of John Chase and his wife Sarah Saunders, who had married in St Petrox in 1827. John became a sailor.

On 6th December 1859 he married Charlotte Memory, from Dittisham, in St George's church in the village. Charlotte was the fifth of nine children of James and Mary Memory. James worked on the river - in 1851 he was recorded in the Census as a bargeman; at the time of Charlotte's marriage he was a lighterman.

John and Charlotte began their married life in Dittisham, where their first child, William Robert Chase, was born on 22nd February 1867. He was baptised at St George's on 23rd June 1867. By the time of the birth of their second child, John Arthur, the family had moved to Dartmouth, where they remained. The 1881 Census shows the family living in Lower St, Dartmouth. All the children, even Thomas Arthur (shown as Arthur), by then just under two, were recorded as "scholars". Later that year, on 14th September 1881, Thomas Arthur and his sister, Charlotte Melinda, were taken to St Saviours for their baptism, along with three of their cousins, sons of John's younger brother Charles Henry Chase.

Other members of the extended Chase family lived nearby. John's parents, John and Sarah Chase, lived with John's youngest brother Charles; and up the street was another of John's brothers, Thomas, also a sailor, with his wife Louisa and their six children.

Then tragedy struck. In 1882, Charlotte Chase died, aged 47, when Arthur was only three; and the following year, Arthur's eldest brother, William Robert, also died, aged only 17.

John married again five years later, in 1887. His second wife was Jane Thomas, a widow of William Charles Thomas, another sailor. She was born in Dartmouth, the daughter of Samuel Gurney, a quaymaster, and she had several children of her own. But it seems that this second marriage did not provide the settled home that, presumably, John intended. The 1891 Census gives some indication that all was not well. John was still living in Dartmouth, but not with his wife Jane. Instead he was recorded as a lodger in the house of Maria Pine, who ran a Marine Store in Higher Street. With him was his eldest surviving son, John Arthur. Both were general labourers, undertaking casual work.

Thomas Arthur's other brothers, James and Frederick, had moved to London to find work, with assistance from members of their mother's family. James was working as an assistant in a coffee house in Leather Lane, Saffron Hill, Holborn, which was run by his cousin Arthur Jackman and his wife Sarah Ann. Frederick, who also lived with the Jackmans, was working as an "electro-plater's boy". But Charlotte, John's only daughter, had been placed in an orphanage for girls in Torquay; she died the following year, aged only 14.

Thomas Arthur had already begun his working life, having found a place as the younger of two farm servants, at Downton Farm, Dittisham. The farm was run by John Oldreive and his wife Sarah Jane. The Census recorded Thomas Arthur as aged 14, though he was in fact not quite 12.

Jane in the meantime was recorded in Brixham, under the name of Thomas, living with her daughters and working as a charwoman. Later Censuses show her as a patient in the Totnes Workhouse Infirmary. Jane's youngest daughter was born in the Workhouse in 1883, before Jane's marriage to John Chase.

By the time of the 1901 Census, Thomas Arthur (again recorded as Arthur) was working on Browns Farm in Capton, near Dittisham, for William Ferris and his wife Arabella. He was described as a servant with the occupation of "Carter on Farm".

Whilst working in Capton, he met his wife, Eliza Hannaford. Eliza was born in Totnes in 1886, but was brought up by her grandparents, Edwin and Mary Eliza Hannaford, in Capton. Edwin was an agricultural labourer. Thomas Arthur and Eliza were married in 1904. They may first have settled in Capton, as the 1911 Census form recorded that their two elder children were born there. By the time of the Census, however, they had moved to Downton Cottage, Dittisham. Thomas Arthur now worked as a cowman. The Census records three children: Hilda Mabel, born in 1905; Edwin Arthur (or Arthur Edwin), born in 1906; and Frederick James Chase, born in 1908. Subsequent records show the birth of twins, Charlotte and John, in 1912, and a son William in 1915.

Like so many, Thomas Arthur's service papers have not survived. However, the British and Victory Medal Roll contains the information that he first joined the 8th Battalion of the Devonshire Regiment, with the number 16300, and then was transferred to the 1st Battalion of the same Regiment. From the 1st Battalion, he was then transferred to the 6th Battalion Dorsetshire Regiment, with the number 22387. He was still serving with the 6th Dorsets when he was killed in action.

The Medal Roll does not give dates. However, we know from the 1914-1915 Star Medal Roll that he went overseas to France on 2nd September 1915. His service number, when compared with those of men joining the Devonshire Regiment whose papers have survived, suggests that he may have enlisted in April 1915. He may perhaps have waited for the birth of his son William early in 1915 before joining up.

It seems likely that he received his training in Wareham, Dorset. This was the headquarters of the 11th Battalion Devonshire Regiment, which provided drafts of trained men for the Service Battalions raised after the outbreak of war.

Thomas Arthur joined a Battalion which included many men from Dartmouth and which had been in France since 25th July 1915. Amongst them was his cousin, Charles Chase. At the time Thomas Arthur arrived in France, the 8th Devons were in Noyelle, south of the La Bassee canal, and east of Vermelles. For their experiences at this time, see the story of Andrew Prettyjohn.

The Battalion War Diary does not mention any reinforcements joining until after the Battle of Loos (for their experiences there, see our separate article on the battle). However, on 28th September, a draft of 50 arrived to join the survivors of the 8th Devons at their billets in Beuvry. The Diary observes that "these men were very tired and could hardly march the distance". Another 50 NCOs and men joined on 6th October, and a very large party, of 300 NCOs and men, on 7th October. It therefore looks likely that Thomas Arthur joined the 8th Devons sometime between 28th September and 7th October 1915. On 12th October, Brigadier General Trefusis inspected the recent drafts and "complimented [them] on their smartness and soldierly bearing". Brigadier Trefusis himself did not survive long, being mortally wounded by a sniper on 24th October.

For the Battalion's experiences during the winter of 1915/6, see the story of Albert George Burnell, who was killed whilst on sentry duty on 10th February 1916. The 8th Devons had arrived on the Somme on 7th December, and went back into the front line only a few days before, on 4th February 1916, near Becordel.

We know that Thomas Arthur was with the 8th Devons at least until early March 1916 because he appeared as "wounded" in a casualty list received on 3rd March 1916 and reported in The Times on 14th March 1916. From 20th - 28th February the 8th Devons were in the trenches, and the War Diary records for this period an engagement on 22nd February:

About 5.20pm on the 22nd inst the enemy bombarded Kingston Road heavily with shrapnel and high explosive. Retaliation was called for ... The parapet in front line trench was blown in on left in 2 places and a traverse was blown down ... While the bombardment was going on the enemy kept up a very heavy M.G. fire on our parapet much of which appears to have been high. At 6.45 pm we opened with rifle and machine gun fire on Fricourt and East of Tambour by special request. At 6.45pm fire slackened on both sides considerably and at 8.30pm all was quiet. Our casualties were 1 killed and 6 wounded, three of the Trench Mortar Battery in [the writer's] sector.

No names are given but this may have been the incident in which Thomas Arthur was wounded. The War Diary does not record any other casualties during February (but note that George Burnell was killed during this period without a death being recorded in the War Diary).

How seriously Thomas Arthur was wounded is not known, nor do we know whether he returned to 8th Devons or was transferred to 1st Devons after his recovery. The 1st Devons were at this time in the sector of the front between Arras and Lens. They did not come to the Somme until 20th July - see the story of George Peters.

So far we have not been able to identify when Thomas Arthur joined the 6th Dorsets. Their Battalion War Diary records the number of reinforcements of NCOs and men arriving each month arriving from "CCS" and "base" but there is no indication of the "exporting unit" - if any - or any note of names of NCOs and men (officer movements in and out of the Battalion are recorded by name).

At the end of October 1916 the 6th Dorsets were returning for another stint in the trenches before Le Transloy, having been in Mansel Camp near Fricourt for a couple of days. The War Diary makes the conditions clear:

Everywhere mud and water well up to the knees. Very little accommodation. Conditions bad ... We are occupying old German trenches which are well marked by their artillery. Supports and reserves heavily shelled by HE and whizzbangs. We suffer casualties. Total casualties for two days, killed 6 wounded 20.

Battalion relieved by 7th Yorkshire Regiment and returned to Trones Wood "shelters" (It certainly could not be called a "camp"). All men and officers were in little holes in the ground covered by tarpaulins. It was practically impossible to get dry or clean, or to arrange any proper medical aid post to attend to the men's feet, which were naturally in a very bad condition.

Battalion relieved the 7th Yorkshire Rgt in the trenches ...

Conditions in trenches considerably worse than during last tour.

Relieved C Coy in front line with A coy from reserve trench. Front half of B Coy relieved by rear half.

Thomas Arthur was "killed in action" on 9th November, perhaps during the swap of companies from front to rear. The War Diary records three men killed during the week of 3rd- 10th November (and eleven wounded) but CWGC records show a higher death toll of members of the Battalion killed in action during this period. We know from the available records that Thomas Arthur was a member of the Battalion's Machine Gun Section but there is no specific mention of it in the War Diary.

Thomas Arthur is commemorated on the Thiepval Memorial, which bears the names of more than 72,000 officers and men who died in the Somme sector before 20th March 1918 and have no known grave. 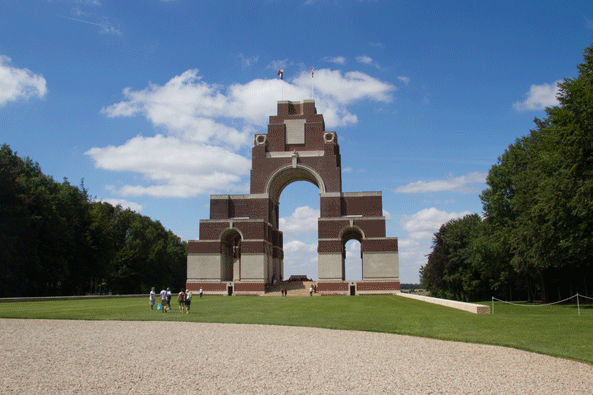 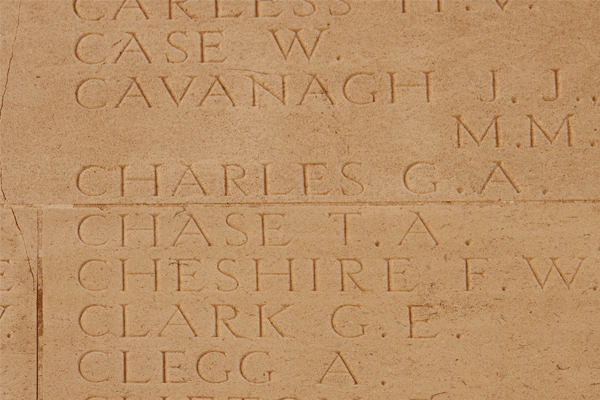 It seems that he is identified on the Dartmouth Town Memorial and possibly on the St Saviours Memorial Board with incorrect first and second names.

The Town Memorial includes the name "Alfred Thomas Chase" and the St Saviours Memorial Board the name "A T Chase". The provisional Roll of Honour published in the Dartmouth Chronicle in 1919 includes the matching name and particulars of unit and death as follows:

He appears as Arthur Chase on the War Memorial in St George's Dittisham.

The statue of St George in the porch of St George's Church also stands as a memorial to all those from the village who lost their lives during the Great War. 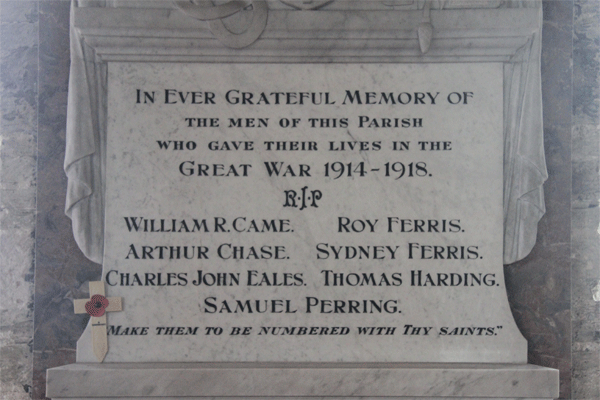 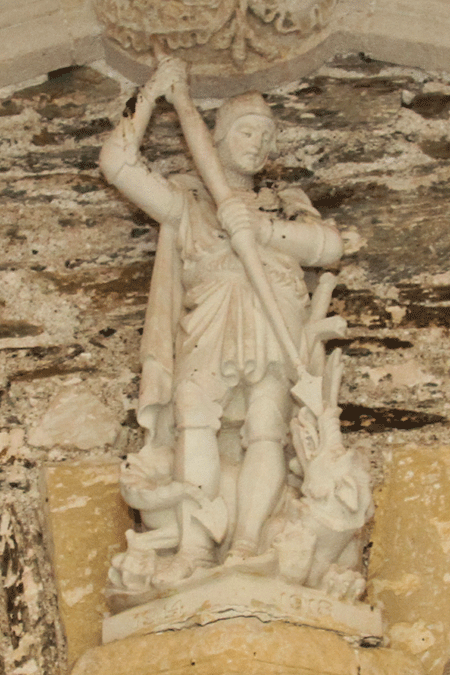