William Southmead Langworthy was not a native of Dartmouth, nor does he appear on public memorials in the town. He is on our database because his obituary appeared in the Dartmouth Chronicle; at the time of his death, his parents lived in Dartmouth.

William Southmead senior also became a doctor, having trained in London and qualified in 1893. He married another doctor's daughter, who was also a cousin. Ethelind Marian Langworthy was the daughter of John Moysey Bartlett Langworthy, surgeon and practitioner, and was born in Salcombe. She and William married in 1894 at St George's Church Modbury, where several generations of the Langworthy family had lived.

After their marriage, William and Ethelind moved to Penryn, Cornwall, where William Southmead (junior) was born on 28th August 1895. They soon returned to Devon, however; William had begun a practice in Yealmpton by the time of the birth of their daughter Dorothy on 13th November 1896. Twin boys, Cyril and Edward were born in 1897, but sadly Edward survived only a few weeks. The couple's last child, Diana, was born in 1905. The 1901 and 1911 Censuses both recorded the family at "The Retreat", Yealmpton.

William Southmead (junior) was educated at Plymouth College and St Paul's, London; while at school in London, he lived with his great-aunt, Mary Janson Andrews, at 9 Park Hill, Richmond. His father had also lived with his aunt Mary (his mother's sister) when studying in London to become a doctor. However, William (junior) chose not to follow a medical career, instead going on to study at the Camborne Mining School in Cornwall, presumably with a view to working in the mining industry. (The School is now a part of the University of Exeter.)

William first joined the Honorable Artillery Company in London, part of the Territorial Force, and one of the oldest military organisations in the world, being able to trace its origins back to 1537. He attested on 8th March 1915, when not quite 20. At that time he was still living with his great-aunt, at 9 Park Hill, Richmond. He was posted with the rank of private to the 2nd Battalion, then the reserve battalion, at that time in training at the Tower of London, the 1st Battalion having been mobilised at the outbreak of war and sent to France in September 1914. In the meantime his father had been commissioned into the Royal Army Medical Corps, being appointed temporary lieutenant on 12th April 1915, and temporary Captain a year later.

Many of the young men serving with the HAC were commissioned into other units and William was one of these. Three months later, on 2nd July 1915, he was commissioned as a Second Lieutenant into the 7th (Cyclist) Battalion of the Devonshire Regiment. The 7th Battalion was mobilised in Exeter at the outbreak of war and included many Dartmouth men. A second Cyclist battalion, the 2/7th, was formed in March 1915. Both Cyclist Battalions, as such, remained in England throughout the war, though sending many drafts overseas - see, for example, the story of Frederick George Coles, one of many men transferred in 1916 to the Worcestershire Regiment, and Samuel Bickford, James Moriarty and Patrick Gifford, who transferred to the Somerset Light Infantry in 1916. A third Cyclist battalion was formed in March 1915, but was abolished in March 1916.

William spent nearly two years with the 7th (Cyclist) Battalion, being promoted temporary lieutenant on 7th January 1917, before he too was sent to France on attachment. He was posted to the 1st Devons in 1917, joining them for duty in the field on 17th May 1917 as they recovered from the losses sustained during the Battle of Arras.

The experiences of the 1st Devons from May 1917 to 4th October 1917 are described in the story of Edwin John Burnell. William Langworthy was killed on 4th October 1917, at the Battle of Broodseinde, part of the Third Battle of Ypres. He was one of several officers in the 1st Devons who lost their lives in that action, and one of three who had been attached to the 1st Devons from the 7th (Cyclist) Battalion. The precise role he played in the attack is not known. It seems he had been recently promoted in the 1st Devons; some records show his rank at the time of his death as 2nd Lieutenant, and some as Lieutenant.

When William's parents moved from Yealmpton to Dartmouth is not known - it would appear to have been after 1914 - but by the time of his death they were living at Belle Vue, Above Town. The Dartmouth Chronicle of 19th October 1917 carried the following announcement:

Killed in action: The death occurred in action on the 4th inst of Lieut William Southmead Langworthy, Devon Regt. Deceased, who was 22 years of age, received his commission in the Cyclist Battalion of the Devon Regiment, in July 1915, and had been recently promoted in the line battalion of his regiment with which he was serving. He was the elder son of Captain W S Langworthy and Mrs Langworthy, of Dartmouth.

It would seem that William's body was either never found or not identified, for he is commemorated, along with several of his colleagues in the 1st Devons killed on 3rd and 4th October 1917, on the Tyne Cot Memorial, near Ypres (Ieper). Tyne Cot was originally a barn, around which were several fortified "pillboxes"; it was captured by the 3rd Australian Division on 4th October 1917, during the Battle of Broodseinde. 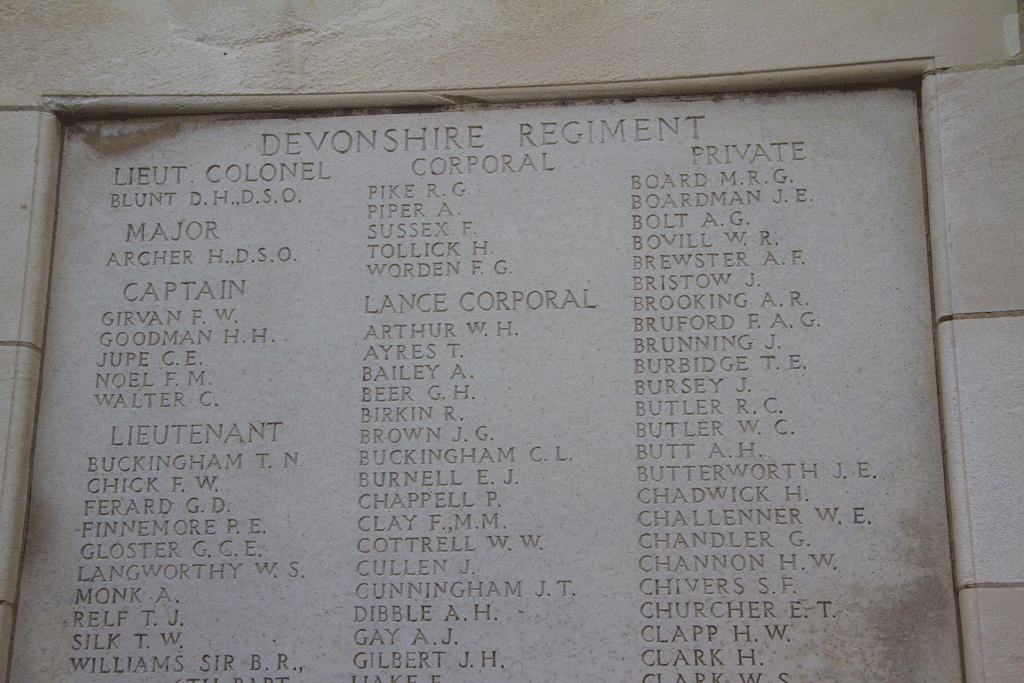 A little after the war had ended, William's parents moved from Dartmouth to Brock's Halt, Galmpton, near Brixham, and this is presumably why his name was not included on any of the public memorials in Dartmouth. He is commemorated on a private memorial in St George's, Modbury, the church where his parents were married. 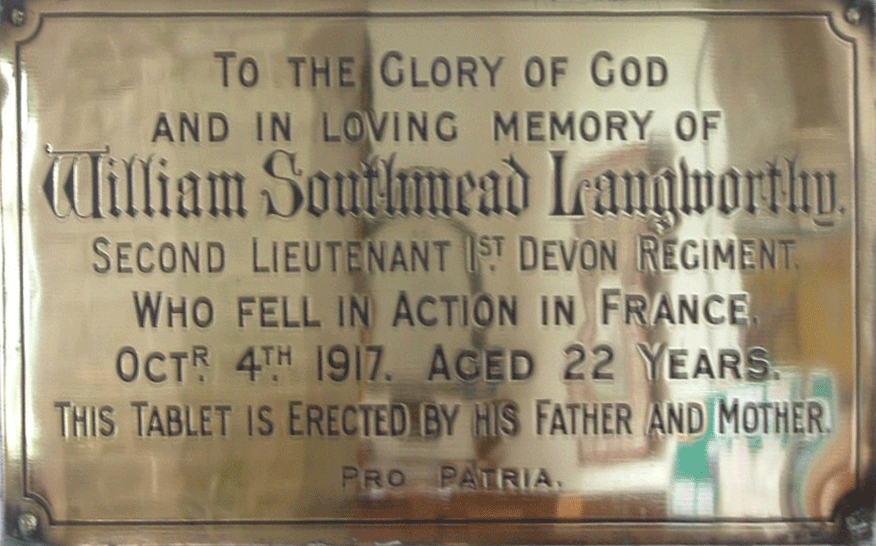 He is also commemorated on the war memorials of the three institutions where he was educated: Plymouth College, St Paul's and Camborne Mining School.

William's career details taken from his entry in De Ruvigny's Roll of Honour, available on subscription websites, and the London Gazette.

St Paul's School and the First World War, including Roll of Honour