Joseph Clarke (sometimes spelt Clark) is included on our database because he is buried in Longcross Cemetery. He was not a native of Dartmouth, nor, apart from the last few weeks of his life, was he resident there, nor did he have any previous connection with the town. The war brought him to Dartmouth, but his death was a tragic accident.

Joseph was born in 1887 in Constable country, on the Suffolk/Essex borders, in the hamlet of Burnt Oak, East Bergholt. He was one of a family of nine children. His father, Walter Clark (spelt as it appears in successive censuses) was a shoemaker. His mother Mary Ann, unusually for the time, worked - in both the 1901 and 1911 census she was recorded as a "postwoman (letter carrier)". (According to the British Postal Museum and Archive, women were employed as letter carriers (or, to use the more modern term, postwomen) in rural areas if men were not available). By 1911 one of her daughters was also doing the job. She and her family were therefore probably very well known in the community.

Joseph lived in East Bergholt all his life. The 1911 Census records his occupation as "Factory Hand" but provides no further clue about the nature of his employment. At the time of his death, he was unmarried.

Joseph Clarke enlisted in Colchester, an early recruit into Lord Kitchener's New Armies. Kitchener had accepted the post of Secretary of State for War on 5th August 1914, the day after war was declared. At that time he was one of the few who expected a long conflict. He had instantly taken steps to expand the Army, seeking Parliamentary approval on 6th August for the size of the Army to be increased by half a million men. On 7th August advertisements were placed in the newspapers for 100,000 men, and three weeks later, for another 100,000. Over the next few weeks, and particularly as news reached home of the retreat from Mons and the hard fight facing the British Expeditionary Force, recruits flooded in. On 10th September 1914, Prime Minister Herbert Asquith told the House of Commons that of the half a million men authorised by Parliament a month previously, 439,000 had already been attested, excluding enlistments into the Territorials.

The success of this recruiting drive enabled Kitchener to authorise the establishment of four "New Armies", each of six divisions. To make up the new divisions, new battalions were to be recruited for every line regiment, called "service" battalions, and numbered consecutively after existing battalions of the parent regiment.

The first set of six divisions (the First New Army, or "K1") formally came into existence on 21st August 1914 and the required numbers of men were very soon reached. At this stage Kitchener planned for the second recruiting wave to bring the Special Reserve Battalions up to full strength, with any surplus being kept for training at the regimental depots. However, such was the flow of recruits by late August and early September that two further sets of six divisions were rapidly authorised (the Second and Third New Armies, "K2" and "K3") and in October the Fourth New Army ("K4") was formed from the August and early September recruits who had been sent to the Special Reserve Battalions but who were surplus to that requirement.

It would appear that Joseph (who had been in the army for four months by the time of his death) was part of this latter group. The regiment he joined, the East Surreys, raised five new "Service" battalions. The 7th Battalion was formed at Kingston upon Thames in August 1914 and was part of K1. The 8th and 9th Battalions were also formed at Kingston, in September, as part of K2. All three went to France, during 1915.

The 10th and 11th Service Battalions were formed on 26th October and 1st November. They were both part of K4. The 10th Battalion was formed in Dover, where the 3rd (Reserve) Battalion of the East Surreys had moved on mobilisation; and the 11th Battalion, to which Joseph was ultimately allocated, was formed in Devonport, Plymouth, where the 4th (Extra Reserve) Battalion had moved on mobilisation. Both the 10th and 11th Service Battalions remained in the UK, becoming Reserve Battalions in April 1915.

Accommodating all these new recruits in satisfactory accommodation during their training proved a huge logistical challenge. The expansion of the existing army infrastructure could not keep pace and training centres were massively overcrowded. Many men were in temporary tented camps. Poor weather from mid-October meant that conditions rapidly deteriorated. By the beginning of December it was decided to billet the bulk of the New Armies in private houses and other buildings, until the building programme could catch up.

On Tuesday 15th December 1914, 700 officers and men of the 11th Battalion East Surrey Regiment arrived in Dartmouth from South Raglan Barracks, Devonport. The Dartmouth Chronicle reported: "the arrival of the soldiers excited a great amount of interest and was witnessed by hundreds of residents assembled on the Embankment". The men were accommodated in public buildings and unlet houses, and "amongst the places utilised by them are the Subscription Rooms (upper and lower), the Market Hall, the South Ford schoolroom, the St Petrox schoolroom, the old High School, Mount Pleasant, the Drill Hall of the 4th Wessec Brigade RFA, the Territorial Cadets Drill Hall, the Clarendon Hotel, and the premises lately the Engadina Cafe".

The Mayor, Thomas Wilton, convened a public meeting to consider a proposal to provide reading and writing rooms for the soldiers to use during their spare time, and the schoolroom at the Dartmouth Wesleyan Church was provided for that purpose. Concerts and other activities were organised; on Christmas Day the men "were provided with plenty of Christmas fare", having attended services in the town. The East Surreys remained in the town until they moved to Colchester, in the summer of 1915.

We know about the circumstances of Joseph's death because the inquest that followed was reported at length and in detail in the Dartmouth Chronicle of 15th January 1915. What follows is based on that report.

On the afternoon of Sunday 10th January 1915, Joseph and three other members of his company, John Loveridge, William Weston, and Harry Thompson, decided to walk from Dartmouth to the neighbouring village of Stoke Fleming. They walked through the village, and in the vicinity of Dark Hole Farm (now part of St Leonard's Cove campsite), Joseph, together with Loveridge and Thompson, left the roadway and walked down towards the cliffs, going through a gateway and across a field.

Perhaps out of bravado, or because (as a man from rural Suffolk) he was attracted by the novelty and beauty of the view, Joseph then climbed over a wall to stand right at the cliff edge. Loveridge warned him to come back as he could see it was dangerous; Thompson also shouted to him to come back, but even as they did so, the ground gave way, and Joseph fell.

Thompson and Loveridge then climbed over the wall themselves, but could not see Joseph. They shouted to Weston, who was back at the road, that Joseph had fallen over the cliff, and Weston came to see if he could help. He tried to get down to find Joseph, going partly down the cliff to a ledge, but could not see him. He was then in danger of falling himself, eventually using a ladder to get back up again. Thompson and Loveridge then ran back to Stoke Fleming to tell the village police constable about the accident and to fetch help.

PC Alfred Friend arrived at the scene with a rope 250 feet long. He first secured the rope around William Weston's waist and descended to another ledge, from which he could then see Joseph's body on the rocks below. By this time others from Stoke Fleming had also arrived to help. With Weston and three local men on the ledge to hold and direct the rope, PC Friend was lowered to the rocks at the base of the cliff. As the Chronicle put it:

A shocking site then met his gaze. The body of the unfortunate soldier was stretched upon the rocks, and the skull was found to have been fractured in a terrible manner.

PC Friend tied the rope around Joseph's body so it could be hoisted back up the cliff, and afterwards he himself was hauled up. In the meantime news of what had happened had been sent to the East Surreys' commanding officer in Dartmouth, and "a conveyance" was sent to Stoke Fleming in which Joseph's body was taken back to the mortuary in Dartmouth. A medical examination by Dr H S Sparrow showed an extensive skull fracture, which, in the doctor's opinion, must have caused death instantaneously.

The following afternoon, an inquest was held in Dartmouth Guildhall, by the Coroner for the Dartmouth district, Mr A M Davson. The body was identified by Robert Clifton, another soldier from the Battalion. He also lived in East Bergholt and knew Joseph well. Loveridge, Thompson and Weston all gave evidence, as did PC Friend (and the doctor).

PC Friend confirmed, in answer to a question from the Coroner, that the men had been trespassing, as there was no public right of way to the cliffs. He futher observed: "The cliff is very dangerous, but hundreds go there. The accident happened at the same spot where another man was killed a few years ago".

In summing up, the Coroner said: "it seemed very sad that the young life of a man who had given himself to serve his country should have been lost in such a lamentable manner". He hoped that the inquiry would serve as a deterrent to others not to walk along that portion of the cliffs, and highly commended PC Friend's conduct, and that of Weston. A verdict of "accidental death" was returned by the jury.

Joseph's funeral took place in Dartmouth on Wednesday 13th January and he was buried in Longcross Cemetery. It was attended by the officers and men of "B" company, to which he belonged. According to the Chronicle, there were "several beautiful wreaths". However, there is no mention of his parents or any member of his family attending.

According to CWGC records, the grave was marked initially with a "small wooden board". A Commonwealth War Grave headstone was provided after the war.

The dramatic circumstances of Joseph's death, and the recovery of his body by PC Friend, were widely reported in papers around the country, as well as in the Dartmouth Chronicle and other West Country papers. 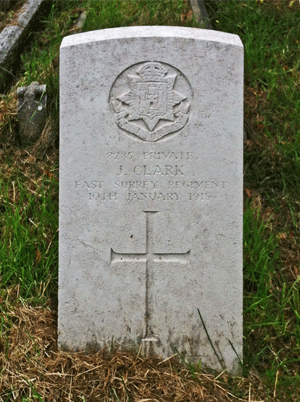 As he was not a native of Dartmouth nor resident there, nor connected in any way to the town, his name was not included on any public memorial in Dartmouth. However, his name is included on the War Memorial plaque in St Mary the Virgin, East Bergholt.

The Roll of Honour for the East Bergholt War Memorial is online.

British Postal Museum and Archive: Women in the Post Office.