William Richard Chorley was born in Dartmouth on 27th July 1862, and baptised in the parish of St Petrox on 17th December of that year. He was the son of James Fear Chorley, a shipwright, from Dartmouth, and his wife, Louisa Horswill, who came from North Huish. The couple married in St Petrox Dartmouth in 1848 and made their home in the town. William was the youngest of six children, with five older sisters: Louisa, Matilda, Mary, Agnes, and Elizabeth, all baptised at St Petrox. He was named for both his grandfathers, William Chorley and Richard Horswill. James and Louisa lived initially in Higher Street but for many years in Lower Street (1861, 1871 and 1881 Censuses). After Louisa died in 1883, James moved to Lincolnshire to live with his eldest daughter, also Louisa, and her husband, and died there.

William's occupation was recorded as "Painter" in the 1881 Census. In 1888 William married Bessie Davis (the marriage was registered in the district of Totnes). Bessie was the eldest daughter of William Davis and his wife Mary Ann. She was born in Stonehouse, Plymouth. Her father was a Sawyer and Mason. The family had moved from Plymouth to Dartmouth around 1875. Five of their children were baptised at St Saviour's, Dartmouth between 1877 and 1883; however, both previous and subsequent records for Bessie's family have so far proved elusive.

William and Bessie's first child, Willie, was born early in 1889, but died very soon afterwards (the birth and death were both registered during January-March 1889). Their second child, Arthur Bernard, was baptised on 18th May 1890 at St Petrox, Dartmouth. According to the 1911 Census return completed by Bessie, she and William had suffered the loss of two children, so this child must presumably have died by 1911. However, no death record in this name has yet been traced.

Shortly after the baptism of his son Arthur, William joined the Navy on 8th June 1890 as a Painter 2nd Class in the Artisan branch. The description of the requirements for the rate in Kings Regulations 1913 (though of course a few years later in date) gives some indication of his skills - apart from being able to read and write and understand basic arithmetic, as a skilled trade the painter was required to be able to undertake:

Plain painting work; mixing colours; writing and painting with brush and paint; oak and marble graining; gilding and repairing work; cutting plate and sheet-glass with a diamond. To possess a knowledge of the preparation of the surfaces of wood and steel to receive paints and enamels

Aged nearly 28, William joined for twelve years continuous service. His naval record stated that he was 5ft 2 1/2ins, with light brown hair and eyes and a fair complexion. His first few months were spent on HMS Indus, guardship at Devonport and flagship of the Admiral Superintendent. During that time he was evidently able to demonstrate his superior skills since on 1st November 1890 he was rated Painter 1st Class, for which the requirements were (in addition to "good character"):

Mixing paint of different colours and shades; painting a door with white enamel; staining and varnishing in imitation of different sorts of woods. Graining and varnishing of different sorts (oak, maple, mahogany, teak, walnut). Marbling, white, black and gold, sienna. Writing with paint in block and roman letters, italics and figures. Glass-cutting of different shapes. Calculating the proportion of paint required for a given surface. To be able to answer questions relative to the proportions of oils, turpentine and dryers which should be used for mixing a given quantity of the various descriptions of the paints in general use on board ship.

Evidently there was a lot more to naval painting than battleship grey! Joining the Navy enabled William to practice his craft while earning steady money and seeing the world, though of course this also meant long periods away from his family. Over the twenty-two years of his Naval career he was offered a wide variety of painting opportunities.

William was appointed on 1st November 1890 to HMS Tamar, a troopship launched in 1863, dual powered with masts and a steam engine. During the three years he served on her the ship is recorded going from the UK to many different destinations, and back: from Portmouth to China; from the UK to Malta; from Plymouth to South Africa; from Singapore to the UK. William must have had some periods of home leave between these trips as his daughter Freda was born in 1891 and a second daughter, Winifred Louisa, in 1893. 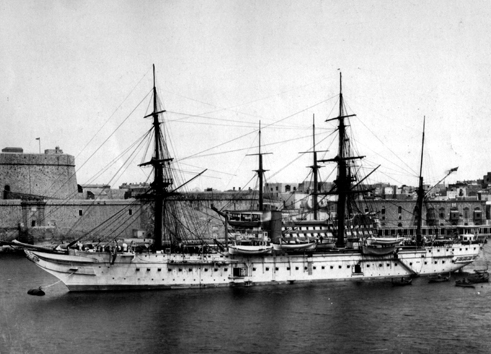 By the time of his daughters' birth the family had settled in Devonport. Between 1893 and 1898 William was based at the RN Barracks and so was able to live at home while they were young. However, in 1898 he was appointed to HMS Collingwood, an ironclad battleship launched in 1882. During the period he served on her, she was a coastguard ship at Bantry Bay, Ireland, a naval base until 1938. This period saw a major period of refortification at the naval base, which during the First World War was the base from which destroyers operated against U-boats in the Atlantic.

William spent a little over a year in Ireland followed by a short period back at Devonport (perhaps for some home leave). On 7th December 1899, he was appointed to HMS Highflyer, a "protected cruiser", the day she was completed and newly commissioned for the Training squadron. In February 1900, Highflyer was recommissioned to serve in the Indian Ocean as the flagship of CinC East Indies Station and spent the next three years there. William was recorded on Highflyer at the time of the 1901 Census, and during his time on board, signed on in 1902 for a second period of continuous service of ten years, to qualify for a pension. 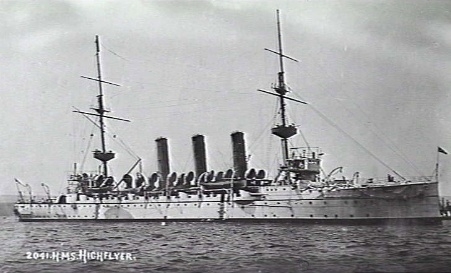 Meantime Bessie, at home in Admiralty Street Devonport, was taking in boarders to supplement the family income. The 1901 Census recorded three boarders living in the house, as well as Bessie and the couple's two daughters.

William left Highflyer on 24th November 1903, as she transferred to the North America and West Indies Station. Once again he was able to enjoy a period based at home, with an appointment at HMS Impregnable, the boys training establishment at Devonport, until June 1906. This was followed by a year on HMS Doris, in the Channel Fleet, followed by two years on HMS Flora, in the Far East and Pacific, until September 1909.

Between 1909 and February 1911 he had a period at home at Devonport with Bessie, who at the time of the 1911 Census was living at 8 Royal Navy Avenue. Freda and Winifred were both working together at Glynn House, near Bodmin, members of the household of Colonel Edward St Aubyn. Freda was a kitchenmaid and Winifred the dairymaid.

On 2nd August 1914 William joined HMS Goliath, as Painter 1st Class. For his service on HMS Goliath, and his death during the Dardanelles naval operation, please see our separate article here.

An announcement of William's death appeared in the Dartmouth Chronicle of 28th May 1915:

The following week, on 4th June 1915, there appeared a small item in the column of the newspaper headed "Local Intelligence":

The Loss of HMS Goliath

The official list of those who lost their lives in the HMS disaster includes Mr W R Chorley, who formerly lived at Dartmouth, and whose widow now resides at Keyham.

A second announcement of William's death also appeared in that issue of the paper:

Chorley - killed in action, through the sinking of HMS Goliath in Dardanelles, May 13th, William Richard, the beloved husband of Bessie Chorley, formerly of Dartmouth, and 8 Royal Navy Avenue, Keyham, age 53

In fact, William was a couple of months off his 53rd birthday. He is one of the oldest men to be commemorated on the Town War Memorial.

Like all those who sailed from Plymouth during the First World War, but were lost at sea, William is commemorated on the Plymouth Naval Memorial on The Hoe.