Frederick Ronald Locke, sometimes spelt Lock, sometimes called Frederick, and sometimes called Ronald, was born in Dartmouth in 1895. His father, Henry Thomas Ball Lock, had been born in Babbacombe, Torquay, in 1864, but by the time of the 1871 Census, had moved to Dartmouth with his family. In 1885 Henry Lock married Charlotte Ann Witcher, in Dartmouth. She was born in Dartmouth in 1866. According to their 1911 Census return, Henry and Charlotte had twelve children in all, ten of whom were still living at that time - five boys and five girls. Frederick Ronald was their third son; John Cyril, and William Ewart, who also appear on our database, were their second and fourth sons.

At the time of the 1911 Census Frederick Ronald was 15 and was still at school. He was shown in the form as Ronald. There is no record of the line of work he went into after leaving school.

However, the small article in the Dartmouth Chronicle of October 9th 1914 reporting his death states he was a member of the 3rd Battalion Devonshire Regiment. The 3rd Battalion was the Special Reserve battalion for the Regiment, providing a pool of trained reservists to reinforce the active service battalions, and remained in the UK throughout the war. According to the website "The Long Long Trail", the prefix "3" before a regimental number (as in Frederick Ronald's case) indicates that the person was a member of the Special Reserve.

SDGW records that he enlisted at Dartmouth, but as his service papers have not survived, it is not known when he joined. He presumably transferred from the 3rd to the 1st Battalion, on or after mobilisation, and before he went to France. According to his Medal Roll Index Card, he arrived in France on 20th September 1914. Earlier that month, the supply-base for the British Expeditionary Force had been moved from Le Havre to St Nazaire, at the mouth of the Loire, to avoid the risk of its being cut off by the German advance. Troops arriving from Britain to reinforce the front line all came through St Nazaire and took several days to reach the front, travelling by rail and then marching to the required area of deployment. Casualties were evacuated back to Britain by the same route.

The 1st Battalion Devonshire Regiment was at that time fighting as part of the 3rd Division, 8th Brigade, of the British Expeditionary Force, which it had joined only a week before, on 14th September, having previously been part of the troops responsible for defending lines of communication for the BEF. The Battalion War Diary refers to reinforcements (two officers and 184 other ranks) arriving on 19th   September (or possibly the following day - the statement is inserted between the two dates in the text), so perhaps Frederick Ronald was part of this contingent.

As Frederick Ronald arrived in France, there was heavy fighting going on. The Battalion at this point was involved in the so-called "actions on the Aisne Heights" which followed the Battle of the Aisne. In Sir John French's second despatch to the War Office, of 17th September 1914, which covered this period, he concluded as follows:

"... from Sunday August 23rd up to the present date, from Mons back almost to the Seine, and from the Seine to the Aisne, the Army under my command has been ceaselessly engaged without one single day's halt or rest of any kind. Since [12th September] a great battle on the Aisne has been proceeding. A full report of this battle will be made in an early further despatch. It will, however, be of interest to say here that, in spite of a very determined resistance on the part of the enemy, who is holding in strength and great tenacity a position peculiarly favourable to defence, the battle which commenced on the evening of the 12th instant has, so far, forced the enemy back from his first position, secured the passage of the river, and inflicted great loss upon him, including the capture of over 2000 prisoners and several guns".

Sir John French's third despatch, of 8th October 1914, describes the Battle of the Aisne in detail. Amongst other things, he describes "a severe counter-attack on the 3rd Division" overnight on 19th September, which was "repulsed with considerable loss"; and on 21st September "another violent counter-attack" which again was repulsed by the 3rd Division.

Deaths: Locke, September 26th, at St Nazaire, of appendicitis, Frederick Ronald, third son of H and C Locke, of Smith Street Dartmouth, aged 19 years.
God takes our loved ones from our home,
But never from our hearts.

Our database therefore uses September 26th 1914 as his date of death.

"actually present on duty within range of the enemy's mobile artillery and were on the strength of, or attached to the units and formations set forth in Appendix A between [5th August - 22nd November 1914]"

The list of units and formations at Appendix A includes 1st and 2nd Battalions of the Devonshire Regiment.

The award of the clasp means that he must have served under fire and so presumably reached the front line, or at least, very near it. As he died at St Nazaire on 26th September, he must also have been evacuated back from the front line.

In an early entry in the the "Diary of a Nursing Sister on the Western Front 1914-1915" attributed to Sister K E Luard RRC, QAIMNSR, the writer describes the planned casualty evacuation process:

"The wounded are picked up on the field by the regimental stretcher-bearers ... they take them to the Bearer section of the Field Ambulance ... who take them to the Tent Section of the same Field Ambulance, who have been getting the Dressing Station ready ... They are drilled to get this ready in twenty minutes in tents ... The Field Ambulance then takes them in ambulance waggons ... to the Clearing  Hospital, with beds. From the Clearing Hospital they go on to the Stationary Hospital - 200 beds - which is on a railway, and finally in hospital trains to the General Hospital, their last stopping place before they get shipped off to Netley and all the English Hospitals".

By late September 1914, Sister Luard's diary shows that the casualty evacuation chain at this time was slow and under considerable strain.

On Friday 18th September, the medical services were still dealing with casualties from the Battle of the Marne, more than a week earlier. On that day, she wrote: "They have been busy at the station today doing dressings on the train. A lot have come down from this fighting on the Marne". The following day she wrote: "They are all a long time between the field and the hospital. One told me he was wounded on Tuesday - was one day in a hospital, and then travelling till today, Saturday. No wonder their wounds are full of straw and grass ... Most haven't had their clothes off, or washed, for three weeks, except face and hands".

On Sunday 20th September, three train-loads of casualties arrived, from the fighting at the Aisne. She wrote "You boarded a cattle truck, armed with a tray of dressings and a pail; the men were lying on straw; had been in trains for several days; most had only been dressed once, and many were gangrenous. If you found one [who] urgently needed amputation or operation, you called an MO to have him taken off the train for Hospital".

It is thus difficult, if not impossible, to see how Frederick Ronald could have landed in France, reached the front line, and then been evacuated back to St Nazaire, all between 20th and 26th September. If Frederick Ronald was part of the reinforcements which arrived with the Battalion on 19th/20th September, which seems likely, he must have arrived in France sooner than the date given on the Medal Roll Index Card. He must also have left the Battalion very soon after his arrival, if the evacuation process was taking "several days".

In any case, he died at St Nazaire, due to appendicitis. The situation in St Nazaire was very difficult. Sister Luard had taken a hospital train down from Le Mans to St Nazaire on 24th September, and wrote the following day that:  "the MOs there told us our lot made 1800 that had come down; one load of bad cases took eight hours to unload. The officers all seemed depressed and overworked, and they were having a very tight fit to get beds for them at the various hospitals at St Nazaire".

Furthermore, appendicitis was a dangerous illness in 1914. According to the Unexplored Riches in Medical History project, reported at www.hiddenlives.org:

"Appendicitis was first named in 1886 and surgery to treat the disease started to become more common after that point. Most famously King Edward VII had to postpone his coronation in 1902 in order to have urgent surgical treatment for appendicitis. Edward VII's operation was successful but sadly, not everybody survived the new surgical technique. From what we have found so far ... appendicitis was fatal in 40% of cases ... In many cases, it was not the surgery itself, but complications of the disease that proved to be fatal. Mortality rates were high for people ... who were also suffering from peritonitis, an infection of the lining of the abdomen. Surgery to treat appendicitis would remove the infected appendix, but if the infection had already spread to the rest of the abdomen, there was little that could be done. Mortality rates only began to drop when antibiotics started to be used alongside surgery in the 1940s and 1950s".

Frederick Ronald was buried at the Toutes-Aides Cemetery in St Nazaire. On the headstone, at his mother's request, was inscribed "Until the day breaks".

Frederick Ronald, and his elder brother John Cyril (see his entry on the database) are commemorated in Dartmouth on the Town War Memorial, on the St Saviour's Memorial Board, and on the St Petrox Memorial Panels.

On the St Saviour's Memorial Board, the brothers are shown as "F B Locke" and "J C Locke". 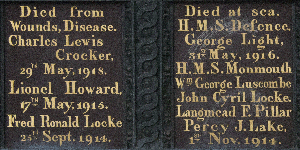 On the St Petrox Memorial Panels, the brothers are shown as "Fred Ronald Locke" and "John Cyril Locke".

On the Town War Memorial, the brothers are commemorated twice: as "F B Locke" and as "Ronald Lock"; and "J C Locke", and "Cyril Lock". Perhaps the confusion about the spelling of the surname led to each name appearing twice when the War Memorial was carved.

The Diary of a Nursing Sister on the Western Front 1914- 1915 is available to download free from Project Gutenberg: